I am defined by plants, some more so than others… and the garden is a place I return to over and over again.

Growing up in South Africa, focus was specifically drawn to indigenous plants- where they could be found, what their names were and how to best get them to grow. On every visit to the bush my mother would collect cuttings.

Flowers are minted into our money –  tiny traveling Proteas.

Jan Smuts was a botanist. During Apartheid, the government deployed botany and particularly flowers, as propaganda tools. With sanctions imposed on almost everything, flowers could represent South Africa on the world stage at international flower shows and in botanical gardens.

Botanical gardens are predominantly framed as being beneficial to the environment and society. Historically they have been concerned with economic botany and taxonomy, and were also established as key infrastructure of European colonialism and imperialism. Little has been done to address this in the postcolonial era.

‘Plant Blindness’ is a form of cognitive bias that refers to the inability to notice or recognise the plants in one’s own environment. The term was coined in 1998 by the Botanical Society of America.

Mesembryanthemums (meaning: noon flowering) or ice plants are a large family of flowering succulents native to South Africa. The Ice plant, Carpobrotus Edulis was introduced to California in the early 1900’s as an erosion stabilisation tool. Contrary to this, the ice plant establishes itself by forming a large thick mat that chokes out all other native species and alters the soil composition of the environment

California’s native Purple Sage is a coastal species which requires no watering and is good for soil erosion.

In 2001 special agents for the US Fish and Wildlife Service carried out a covert investigation into the international smuggling of cycads from South Africa to the US. In a sting operation dubbed ‘Operation Botany’ two plant traffickers were apprehended for the illegal shipment of over $800 000 worth of these rare plants to San Francisco Airport. The ambiguity of the case resulted in light sentences for the men and government lawyers were forced to acknowledge that it was difficult to get stiff sentences for those who commit crimes against the environment.

In 1967 Everett Dirksen made an argument for designating the “native” marigold as the official emblem for the United States, nominating it for being national in character and symbolic of the pioneering spirit. The marigold is indigenous to Mexico, following a period of cultivation and naturalisation in Europe it was introduced to America in the 1700’s. Instead, the rose took the crown.

machinaloci space is a place for playful research into alternative ways of being, thinking, and doing together. The Window Project @ machinaloci space is a series of commissioned artworks that contribute to the local public conversation by working with the shopfront windows as an interface that begins to dissolve the boundary between public and private. 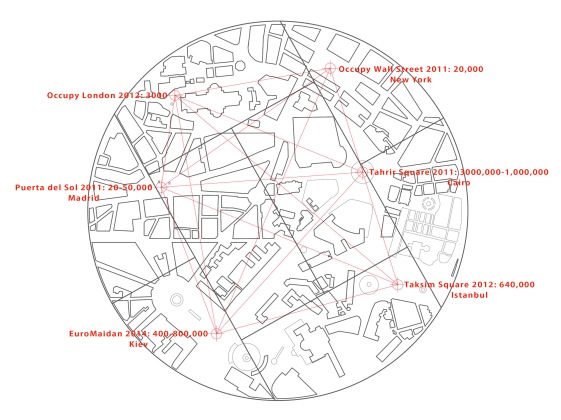 As artist in residence in the Department of Comparative Literature at UC Berkeley during February and March 2017, Carol Mancke will work in the newly opened Media/Maker Lab space (175 Dwinelle) and curate a series of workshops and performances with students, visitors and staff that experiment with different forms of conversation and collaborative thinking.

Made in 2015, Carol’s Table 18, is a  modular table that combines to form a twelve-foot diameter table that seats 18 people. The surface is inscribed with the plan of an imaginary city that knits six real public spaces of recent prolonged public  into one imagined city fabric. Table 18, first installed in the RCA Research Biennial (London 2015), and later featured in The Democratic Table event at the Tate Modern (London 2016), prompted conversations about activism, cities and social change (see machina loci.com for more about Carol’s work).

During this residency, Carol is working on a second table, this one inscribed in a way that draws attention to issues of global (and local) migration. Carol believes that these large round tables can be used to enrich public cultural and political conversation at the neighborhood scale. Working collaboratively with other artists and thinkers, she is testing different methods for deploying the tables in public space that include: public readings and performances; collaborative game development; curated combat and argument; collaborative making, writing and/or singing and other tactics.

Timeline for Dialogue & Round:

London and Oakland-based artist, architect and educator Carol Mancke works at the intersection of art and cities through her practice, machina loci. A graduate of UC Berkeley’s school of Architecture, Carol’s practice engages a range of time frames and scales from drawing, photography, sculpture and installation through to architecture and urbanism. Her work has featured in solo and group shows in Britain and Japan, including the Echigo Tsumari Art Triennial in 2009. In 2011-12, she was artist in residence at the Central Institute of Technology in Perth, Australia. Carol was a Senior Lecturer at Kingston University London (2004-2014); has degrees from M.I.T., UC Berkeley and the University of the Arts London and is currently pursuing a PhD in fine art practice at the Royal College of Art in London. Her research looks at the capacity of artistic practices operating in public to generate alternative ways to think through and produce structures of everyday life. She is investigating how artists challenge the way cities are designed and inhabited; how their work helps us to break through habitual patterns of thought and whether it is possible for artistic practice to function as a positive force in the public arena outside the operations of capital. Carol is currently a visiting researcher in Comparative Literature at UC Berkeley.

In July 2014, artist Carol Mancke explored the performative possibilities of Ellesmere Port car parks – filming from above using a camera suspended from balloons – and collecting individual stories about cars in Ellesmere Port. Please say hello if you see her!

And, if this piques your curiosity, perhaps you would be willing to participate in the experiment by allowing Carol to interview you in your car? If so, please email her at carol@machinaloci.com.